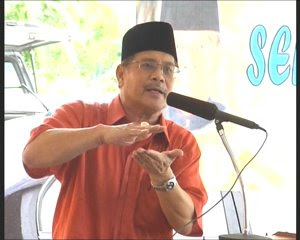 Updated 10.15pm sms received from Miri - Most likely DSAI will announce a Sarawak BN YB has resigned from his party and he has applied to join keADILan.

The word is abuzz that the YB in question has already signed his membership forms and the identity will be revealed by Anwar himself in Miri at the Eastwood Valley Golf and Country Resort around 10pm tonight. audie61 checked with the political secretary from the party and he says there is no way he will be persuaded to stay with BN.

Our sources in keADILan says that Malaysiakini correspondent from Sarawak will do his posting as soon Anwar reveals the name. The sms from keADILan innsider in Miri is that A DUN member from Sarawak is to join keADILan. We will keep you update on his name though we know who he is. He is not from Parti Rakyat Sarawak as many have speculated. Would Anwar reveal that is the million dollar question tonight?
Dicatat oleh hanyar di 9:40 AM