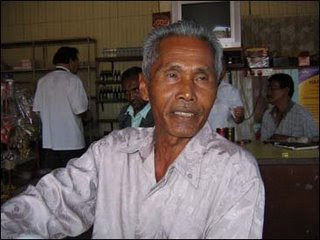 The leader of the deviant group whose real name is Ariffin Muhamad feted his followers in Besut in the pretext of celebrating the auspicious day.

“Ayah Pin freely performed korban on Hari Raya Haji and no attempt was made by the authorities to detain him. I am sure he is on the wanted list and am baffled as to why he was allowed to roam without restraint,” said Ramlan Ali (Barisan Nasional-Jabi) while debating the 2009 state budget during the assembly sitting.

“Various enforcement agencies have blamed each other for the lackadaisical approach against him. How long do we have to wait before Ayah Pin is apprehended?

“Don’t let the Ayah Pin issue cause a chaotic situation for all of us,” Ramlan added.

Ramlan received support from Mohd Nor Hamzah (PAS-Bukit Payong), who urged the authorities to look into other mechanisms to detain Ayah Pin and eradicate any remaining vestige of his deviant teachings once and for all